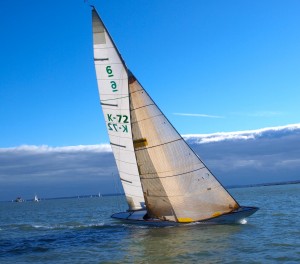 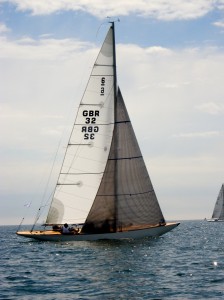 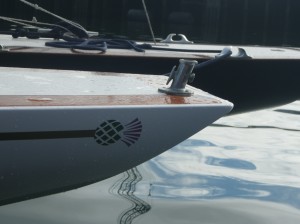 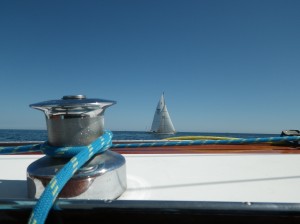 The International 6 Metre Class has long associations with the River Hamble which go back before the First World War. The 6 Metres were the Olympic keel boat class up to just after the War before being superseded by the International 5.5 class. Many of the most competitive 6’s were sailed out of the Hamble which was the centre for many of the top crews who fished during the winter months and raced on the Solent during the summer. The class almost died out in the late 30’s due to the high building and running costs. Many of the older yachts which had been converted for cruising, raced in the separate Q class.

There was a resurgence in interest in 6’s between 1947 and the early 50’s with new boats being built which included “Thistle” which still races out of the Hamble and the “Royal Thames” in which John and Bill Foulkes of Foulkes’s Boatyard Bursledon, crewed, a period when she won many prizes.

Due to the efforts of a small band of enthusiasts and the rebirth of the World and European Championships, the 6 Metre Class started to come alive again in the UK with the first post war Britiish Championships being raced at Cowes in 1985. Col. Tim Street was the prime mover. Through his great efforts and the input and enthusiasm of a number of top sailors, who wanted a class that could give them exciting racing, without the requirement of having to build a new boat every year to remain competitive.

A number of modern 6’s were built with a fin keel and separate rudder as opposed to the Classic 6’s with the more traditional long keel. Two new Ian Howlett designs were built at the Elephant Boatyard, Bursledon in the late ‘80s. The first was “St.Kitts” which won the 1988 Europeans in Falmouth and is still sailing out of the Hamble with her close sister “Georgia”.

The Royal Southern Yacht Club has always been a big supporter of the Class and has organised British Championships, the Southern 6 and many other events for the Class.

The 2015 season included the 6 Metre World Championships with over 40 boats racing in Brittany at La Trinite, the British Championships with the RSrnYC, the Cowes Classics, Royal Yacht Squadron 200th Anniversary and the Bursledon Swanwick Regatta. A full on year with fantastic sailing with great people in beautiful boats that handle like a dream. Hard to beat!

A class that was born back in 1907 and which competed in the first Olympic Regatta at Ryde in 1908 is still going strong and always looking for new challenges. Long may they grace the River Hamble.

Spring is in the air